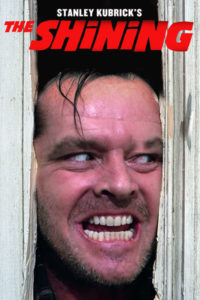 OK kiddies, with Halloween only days away, any of the horror films I will review can be deemed the scariest of all time! You make the final decision. Today is one of my all-time favorites, The Shining.

That’s Hollywood for you. They love you. They love your book. They buy your book. They adapt it into a big budget feature, and in the end only really bring bits and pieces of your story to the big screen for audiences to see. In this instance, it’s “The Shining,” an acclaimed horror film adapted by director Stanley Kubrick that author Stephen King has always hated. But then King is only one in almost a hundred authors whom absolutely detested the big screen versions of their novels. Claiming that the soul of the story had been lost, King also wasn’t thrilled with the casting of Jack Nicholson, whom he said seemed crazy from the beginning rather than an everyman who gradually goes off the deep end. Director Kubrick’s idea of planning a film that respected the source material of King’s novel but not completely following the story is a bit of Hollywood rogue filmmaking that ended up angering King but simultaneously created one of the most beloved horror movies of all time

Now for the meat and potatoes!

Kubrick creates an atmosphere of absolute dread from the opening credits, one that continues to build throughout the film. Jack Nicholson’s portrayal of Jack Torrance makes us uneasy from the start, and we quickly realize during the scene where the family rides up to the hotel that things are only going to get worse. Many complain that Nicholson was too over the top, but that is precisely why it works. It makes his character that much more unnerving and unpredictable. Meanwhile, Danny Lloyd in the role of Danny Torrance is so quiet and indrawn that he is equally disturbing, especially when he lets the finger do the talking. The supporting cast of ghouls, from Lloyd the Bartender to Grady the old caretaker, is both unsettling and charming in an odd way, as they represent the hotel exercising its seductive power on Jack. The only weak link is the cast is Shelley Duvall, whose mousy whining, while not bad enough to drag the picture down, certainly gets tedious after a while.

Jack Torrance is a caretaker, of sorts, who has just agreed to take his wife and son along with him to watch over, for almost five months, the monstrous Overlook Hotel (the exteriors of the hotel are actually taken from Timberline Lodge on Mt. Hood right here in Oregon). Their family already has a history of being dysfunctional—Jack himself once abused his son, the wife Wendy is a heavy smoker and is always paranoid, and the son Danny is, essentially, psychic. The hotel they are asked to look after is one of the most atmospheric in a movie: it contains long corridors, echoing bathrooms, strange open areas, and pictures from the past hanging on walls, in which the people appear happy but look like they’re hiding secrets. One of the areas of the hotel piques the interest of the little boy—Room 237—but he is told not to go inside. Each time he is near, though, a vision of two little girls appear, accompanied by them “come play with us.” We then see the same hallway (for only a brief second), but the little girls are slaughtered and their blood soaked into the walls. The look on little Danny’s face is enough to upset any viewer here; the actor in place of him seems to really be frightened with the material.

When it comes to embodying characters, however, Nicholson is the real master at work here. We slowly watch the layers of his character peel away to reveal a heart of pure stone and hatred; the love for his family becomes revulsion, as he walks around the empty hallways, sees images of parties, and drinks a few shots of alcohol (even though the film establishes he is a recovering alcoholic). He originally planned to use the time in the hotel to finish writing a novel, insisting that his wife and child do not disturb his concentration. But maybe hallucinations and a feeling of claustrophobia brought on by a sudden blizzard are too much for his sanity to handle. When Wendy goes to investigate, her findings are a bit startling—every page of work he has typed for his book repeats the same phrase: “All work and no play makes Jack a dull boy.”

The real star of Kubrick’s film is the hotel itself. As we follow Danny’s big wheel ride down vast, empty corridors, we get a sense of just how huge, and creepy, the place really is. We know some strange stuff is going on in the hotel, but we’re not sure what or why. Everything isn’t spelled out for us in big bold letters. Instead, we have to work to put the pieces together. Is what happens to the Torrance family the result of a genuine haunting, or is it just a case of cabin fever combined with mass hallucination? When Jack walks into the ballroom and is surrounded by people in 1920’s costume, is the hotel really full of ghosts, or has he just finally gone over the edge?

“The Shining” has earned a feverish following over the years, the kind that has elicited so many theories and personal readings into Stanley Kubrick’s underlying themes and subliminal messaging that it has spawned its own movie, a fascinating 2012 documentary called “Room 237.”

Bottom line, this movie from start to finish scared the bejesus out of me. My rating, out of five fangs, this one gets 5 BIG bites!