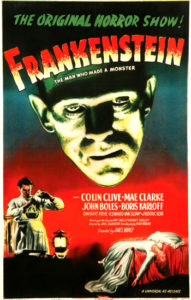 For my money, this is the greatest horror movie of all time! (Although it’s sequel, The Bride of Frankenstein (1935) comes in at a close second) Decades after its release, this classic monster movie remains just as eerie today thanks to the chilling presence of Boris Karloff as the monster. When he first appears on-screen — a hulking, lumbering, vacant-eyed creature — the moment is pure black-and-white horror. But Karloff also invites sympathy with his portrayal of a tragic and misunderstood being with the body and strength of an ogre but the mind and innocence of a child. Despite his prominence, Karloff was not listed in the film’s opening credits (which indicate that the monster is played by “?”), although his name does appear on the roster at the end. Even though the actor utters nothing more than occasional groans and grunts and is buried under makeup, there’s nevertheless a great deal of subtlety in this performance.

Mary Shelley wrote her legendary Gothic novel “Frankenstein: The Modern Prometheus” to make good on a wager she made with the poet Lord Byron while spending the summer of 1816 at his Swiss villa with her husband Percy. Her mission was to scare the hell out of the reader. Without a doubt, she won the bet.

“A word of friendly warning…”

Frankenstein opens with a warning to the audience, advising them that the faint of heart may want to consider leaving before the shocking and horrifying story gets underway. Even to those who do not consider themselves horror aficionados, the story is well known. Dr. Henry Frankenstein (Colin Clive) is obsessed with the concept of creating life. Having left school because the scientists there would not permit him to continue his experiments, he has retreated to an isolated Bavarian castle where he uses bodies stolen from graves to further his work. Then, one dark and stormy night, he succeeds in bringing life to a previously-inanimate parody of humanity, a patchwork quilt of different body parts crudely stitched together. His elation is short lived, however – the creature’s animalistic behavior quickly disillusions him, and, after it kills his hunchbacked assistant, he decides to destroy it. With the aid of his former mentor, Doctor Waldman (Edward Van Sloan), Frankenstein concocts a plan to eliminate the monster, but the creature escapes from the castle and begins to roam the nearby countryside.

Try as they might to tame it, to civilize it, to teach it, the monster goes on killing. The young doctor gives way to the great strain and is taken home. Finally, the monster escapes into the countryside and kills a little child, the only human that had ever been kind to it. This time it seems to realize what it has done. What pity the thing is capable of showing, it shows here. Then, on the wedding day of the young doctor, the monster gets into the bridal home, attacks the bride-to-be and again escapes. This time the entire village is set to trap and kill it. High up on the mountain they find “the thing,” but not until it has captured and carried away the doctor whom it has snared from out of the posse. In its flight, it seeks safety in an old mill. Here the mob comes and, failing to capture “the thing,” they set fire to the building. In its rage the monster throws the body of its creator into the mob and, trapped in the flames, it burns to death.

Colin Clive as the doctor and Boris Karloff as the monster give tremendous performances. No matter what you think of the picture, you can take nothing from these players for the performances they have turned in. They are magnificent.

James Whale has done a great job in his direction. This is not an easy thing to direct — just how far to go in playing upon an audience’s credulity, it’s sympathy, it’s nerves.

On the two hundredth anniversary of Mary Shelly’s book, this adaptation is eerie, beautiful, and ultimately poignant. Frankenstein is still a startling film about the borders between genius and madness, science and atrocity. It is my favorite and if you haven’t seen it yet, scare yourself on this Halloween Eve and watch it! David Ruggerio’s rating, out of five fangs, this one gets the 5 BIGGEST bites!