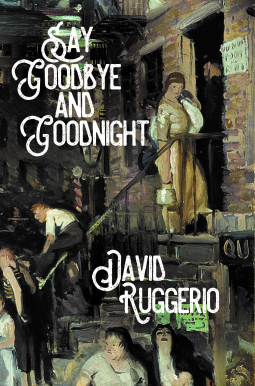 With the release of my new novel, Say Goodbye and Goodnight, the press release for the book is being circulated. The release date is June 11th, 2020, although you can already pre-order on Amazon.com. This is a romance that both men and women will love. Based in Brooklyn during the tumultuous year of 1977, David Ruggerio will show you his hometown as no other can.

On the Heels of an Award-Winning Debut, David Ruggerio Releases His Second Genre Fiction Novel

Prepare for a raw and riveting romance that most people can only wish to experience in their own lives.

Say Goodbye and Goodnight takes us to Brooklyn in 1977 where we meet an up-and-coming fighter named Anthony Marino who falls for Gia, who becomes the love of his life. But the hatred their affair attracts could be their demise. Set against the backdrop of disco music and the grit of the city, this book takes readers to a time in history that liberated a generation.

Ruggerio says, “Say Goodbye and Goodnight is a novel that I lived. I have laced this tale with real people and real places, and most of all, real romance. It was truly a labor of love that at times I had trouble putting down my feelings on paper.”

Ruggerio’s Say Goodbye and Goodnight has received advance praise from prestigious reviewers. Reader’s Favorite refers to it as to a “modern-day retelling of a classic Shakespearean tale of love enduring all forms of tragedy,” and Sublime Book Review recommends it as “a well-written, unexpected, and unconventional love story.”

The book is currently available on pre-order on Amazon.

All press inquiries should be directed to Black Chateau Enterprises @ https://www.blackchateauenterprises.com/