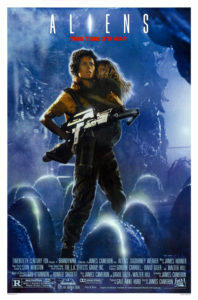 Just like the film that precedes it, Aliens is a cinematic masterpiece. Whereas Alien was a space horror type film that was all about mood, tone, and atmosphere and using the claustrophobia of the ship to produce its scares, Aliens is a rip-roaring balls out action fest. The tension and claustrophobia of the setting are used to make things more intense and scary, but this is an action film through and through.

The movie opens with that familiar wide-pan view of the outer reaches of space, and a silent ship glides past the camera like a lure on a fisher’s pole. We enter its interior with cautious optimism: we saw this vessel briefly, in the closing shots of “Alien,” where the last survivor of the Nostromo placed herself in hypersleep after an exhaustive battle with a bloodthirsty alien that ultimately resulted in the destruction of her massive ship and crew. Now, an apparent 57 years later, a passing cargo vessel has picked up the wandering ship, and Ripley awakens to the realization that the world around her has changed, and not necessarily for the better.

Director James Cameron’s screenplay is a how-to guide in pitting an elite group against a vastly superior foe. You can see Cameron’s fingerprints on scores of sci-f/action films to this day, but his is still the best thanks to the distinct personalities he gives each marine. They’re brash, overconfident and so tight-knit you’d think Cameron already made a Colonial Marines film. It also helps to give them all highly quotable, memorable lines.

We watch Ripley barely able to handle her psychological trauma to becoming the determined leader unafraid of how many aliens she encounters — especially if they threaten her surrogate daughter (leading to one of the film’s trademark lines).

Nominated for seven Academy Awards (including Best Actress for Sigourney Weaver), this won for Best Visual Effects and Best Sound Effects Editing.  Aliens is one of the most intensely shocking films you’ll ever see. Even if you think you’ve got the stamina for cinematic suspense, you may find yourself out in the kitchen, midway, catching your breath.

To pick a favorite between Alien(the original) and Aliens is a daunting task, one which pits one masterpiece against another, but I’ll favor the original here for the simple reason that it had scrapes, scares, and inventiveness that wasn’t as evident in the sequel. This film does yield Weaver’s best performance of the series and the effects are more modern and for being a sequel to a popular horror film, they did a fantastic job avoiding common pitfalls and hazards to which so many others succumbed.

Bottom line, this movie from start to finish scared the bejesus out of me. My rating, out of five fangs, this one gets 5 BIG bites!

We must never forget! #september11

After more than 25 years, I am publishing another

We are in the height of the season! Picking a bask

A blast from the past-me, at fifteen, fighting an

My first harvest of my favorite variety of tomatoe

To all my French brothers and sisters- Happy Basti

Even with all her warts, I love this country to de