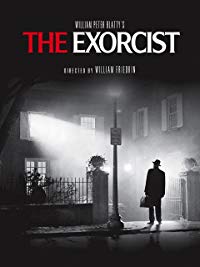 Well, are you ready for today’s Halloween Horror movie review? In late 1973 and early 1974, women and men were lined up for blocks. People were known to become ill watching it. Some fainted. Some ran out of the theater in tears. There were reports of people having to be institutionalized, and at least one miscarriage was attributed to viewing it. No, it wasn’t a Rolling Stones Concert. It was a film called The Exorcist.

What scares us more than anything? The answers are multiple: the dark, the evil, a mysterious presence, and ultimately death; in fact, anything uncontrollable. And when you think about it, all these elements have something in common: You’ll find them all in The Exorcist!

What’s remarkable about The Exorcist, especially when you compare it to other horror films, is its patience. It takes the time to calmly develop the ordinary home life of a modern family, letting you get comfortable in the setting, and then things slowly get stranger and stranger, until eventually everything you knew has been upset or overturned.

Now for the meat and potatoes…

Never have I seen a film matched in shock, terror, writing, or performances. This isn’t a horror movie. The film itself is both a moving and terrifying drama that takes a realistic look at what would actually happen if a young girl were possessed in modern America. William Peter Blatty’s script is amazing, bringing depth to the characters, and presenting the mystery of faith that they all deal with. Is Regan possessed? Is she insane? And most importantly, is there a God? In the course of two hours, we see a sweet and innocent young girl become a cross masturbating, head spinning, murderous, creature. We see a successful actress overcome skepticism to save her daughter, and we see a brilliant psychiatrist struggle with his devotion to God as a priest.

An incredible cast provides convincing performances. The two lead roles are played by Ellen Burstyn, who plows through a gauntlet of emotions in her portrayal of a distressed mother who watches on as her daughter turns into a monster. Then there is Jason Miller, (The stand out performance) who gives a heartbreaking turn as the lapsed priest guilt-ridden over the death of his mother (who dies earlier in the picture).

The young Linda Blair puts on a brave performance in the daunting role of a foul-mouthed, crazed, self-mutilating creature. Her performance is enhanced by the superb voice work of Mercedes McCambridge who reportedly drank raw eggs and whiskey, and chain-smoked to achieve the un-Godly demon growl featured in the film.

Other roles are performed admirably by Kitty Winn as Burstyn’s assistant, Lee J. Cobb as a police detective investigating a murder case which implicates the possessed child, and the excellent Max Von Sydow as a fragile and battle-scarred man of the cloth.

How many horror flicks can boast 10 Academy Award nominations? Call it a horror film, call it a religious film, call it what you want. The Exorcist delivers on every level – it’s a gripping, chilling, well written, brilliantly acted, powerfully directed, thought-provoking and provocative movie. Not a just a movie that delivers shocking moments for the sheer sake of it, everything has its place and a meaning. This is a powerful movie that continues to stand up today and for good reason too – it’s a masterpiece. The Exorcist is and will always remain a classic in every sense of the word.

My rating, out of five fangs, this one gets 4 ½ bites!

Next up, a modern day classic that had spurned a nest full of younglings!