Welcome to Ruggerio’s Library. Sit back, get comfy, pour a glass of wine and discover all my books.

In this, Ruggerio’s Library, you will find that I’ve written cookbooks, horror and romance. At first glance, my books are all over the map, but if you look closely they share a common theme: they are books about a struggle to live a life well-lived. I strive to reveal to you the very best recipes, while scaring you and giving you an example of a love for the ages. I believe that the only compass you can follow as a writer is to write the story you, yourself, long to read. Stay tune, this crazy journey is about to make a sharp detour! 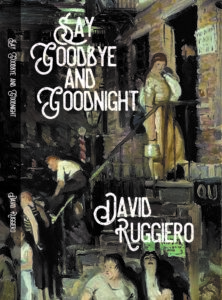 It was a summer of loving.

I promise that my Brooklyn will make you smile, rejoice and cry a little bit, but you will love it.

Say Goodbye and Goodnight, one of the best new romance novels of 2020, takes us to Brooklyn in 1977 where we meet an up-and-coming fighter named Anthony Marino who falls for Gia, who becomes the love of his life. But the hatred their affair attracts could be their demise. Set against the backdrop of disco music and the grit of the city, this book takes readers to a time in history that liberated a generation.

Ruggerio says, “Say Goodbye and Goodnight is a novel that I lived. I have laced this tale with real people and real places, and most of all, real romance. It was truly a labor of love that at times I had trouble putting down my feelings on paper.”

Ruggerio’s Say Goodbye and Goodnight has received advance praise from prestigious reviewers. Reader’s Favorite refers to it as to a “modern-day retelling of a classic Shakespearean tale of love enduring all forms of tragedy,” and Sublime Book Review recommends it as “a well-written, unexpected, and unconventional love story.”

The book is currently available on Amazon and Barnes & Noble. Also checkout Indiebound.org.

Here are a few reviews of my book;

“Often it felt like God was far off in the distance, though there was always that affirmation of an unseen helping hand. Still, behind every twist and turn, a demon was hiding . . . “

It’s a summer of love, family, and boxing for sixteen-year-old Italian-American Anthony “Ant” Marino. As Ant trains away his mornings with Izzy, a boxing coach who reshapes street urchins into respectable young men and tough fighters, Ant navigates a steamy romance with the heavenly Gia, a girl he comes to love, adore, and respect beyond belief. As Ant mediates the tense relationship between his brother, Sal, and his father, Ant becomes a family pillar, wise and determined beyond his years. However, in a city filled with life, food, clubs, and crime, and amid the sweaty days of training and the hot nights of romance, creeps something sinister: the .44 Caliber Killer who preys on young women and reshapes Anthony and Gia’s future—and the future of their families—more than either could ever imagine.

David Ruggerio’s Say Goodbye and Goodnight paints an immersive image of the Italian dominated neighborhoods of Brooklyn in the 70’s. With a cast of characters who are each portrayed as individual elements in the life of protagonist Anthony “Ant” Marino, the story pulls you forward into a constantly moving web of their lives. Ruggerio uses vibrant imagery that engages the reader while also being light-heartedly funny even when dealing with the darker aspects of Ant’s life. Lines like “The Greeks had Socrates, the English had Shakespeare, and Brooklyn had Izzy,” really exemplify Ruggerio’s ability to create metaphors that help the reader to understand the world of his novel.
Ant’s romantic journey is written in such a way as to evoke Shakespearean love, acknowledged by the name of the weekend hub of Ant and his friends — “Romeo and Juliet’s.” Gia and Ant share a love that is described to be true without question, a portrayal which gives a fairytale quality to the otherwise rough-and-tumble world that Ant lives in. The soft, honesty of Ant’s love for Gia helps to offset the more hyper-masculine qualities of the Mob lifestyle that he has taken on. Overall, Ruggerio does an excellent job of creating the world and personality of a character that readers will be intrigued to follow through the novel.– Author’s Circle

Set against the backdrop of New York City’s Italian community, this novel blends New York City brashness and humor with the wit and whimsy of a young man exploring his youth, his ideals, and his purpose. With its Godfather-like characters and settings, this book displays the ever-controversial and ever-changing demands and ties of cultural duty and mindset, familial ties and expectations, and the complexities of father-son relationships. The psychologically thrilling parts of this book stem from its portrayal of the .44 Caliber Killer, an unseen enemy that young Anthony Marino feels he and his friends must stop before he harms the young women in their community. Readers of romance, suspense, and murder mystery will enjoy this book, as will those who enjoy a more historically based type of fiction. —US Review 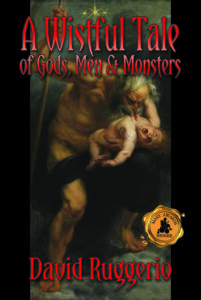 A Wistful Tale of Gods, Men and Monsters – On a Bookshelf Now!

A Little Bit About My First Horror Novel–

Can a village be inherently evil?

On the façade, this sleepy hamlet comes to life every autumn with picturesque apple orchards, haunted corn mazes, fun-filled pumpkin patches, and holiday hayrides. During a snowy Halloween, a young William Willowsby must battle evil forces that have been shielded by the locals for generations. On the outskirts of the town is the abandoned Forest Park Cemetery. All things wicked seem to revolve around the old graveyard. A rarely seen homunculus serves an evil taskmaster. Together they weave a wicked web that attempts to snare the youth of the hamlet. A creepy graveyard, a spooky schoolhouse, an abandoned mortuary and a member of his own family will leave you simply sleepless. 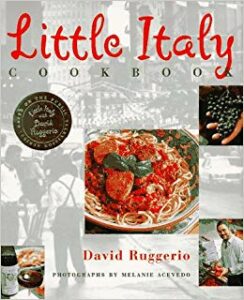 PUBLISHERS WEEKLY- In this companion volume to his PBS series, Little Italy with David Ruggerio, the very busy chef retreads some very familiar ground as he offers recipes for such Italian American standbys as Neapolitan Stuffed Peppers and Zabaglione. Ruggerio is the chef and owner of New York City’s Le Chantilly restaurant. Here, however, he returns to his ethnic roots, playing the immigrant angle to the hilt in chatty, unfocused chapters organized around such themes as his grandmother and his friends. Recipe headers are anecdotal and often amusing, such as the story of a dog named Val (named for Rudolph Valentino). Some other headers are frustrating, however: the one for Orecchiette with Broccoli Rabe tells the reader “fresh pasta is better” but fails to include instructions for making orecchiette (there’s a recipe for pasta dough, but orecchiette are made from the eggless dough). Recipes for standards such as Pizza Margherita, Polenta with Sausage and Tomato Sauce and Amaretto-Chocolate Cheesecake are competently executed. A few vegetable pies–e.g., the Grain Pie traditionally prepared for Easter and a Pasta, Ricotta, and Dandelion Pie–offer fresh tastes. This is a bighearted, unpretentious cookbook–and Ruggerio has no qualms about promoting friends, insisting, for example, that Colavita olive oil is the best.  Available on Barnes & Noble and Amazon. 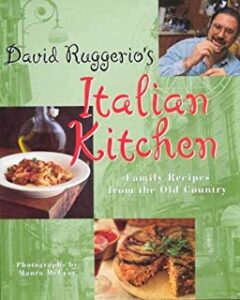 PUBLISHERS WEEKLY-Classically French-trained chef (formerly of Le Chantilly in New York City) and former Food Network host Ruggerio returns to his southern Italian roots (via Naples, Sicily, and Brooklyn) with irrepressible enthusiasm. Ruggerio draws a distinction between the cooking of Naples (from his mother’s side), which is “colorful and accessible, using mostly basic ingredients,”” and that of Sicily (his father’s homeland), which he describes as “complex and subtle, calling for some `exotic’ ingredients.”” More than 150 recipes from both regions are folded into the book’s seven chapters: antipasti, soups, pasta, fish and shellfish, meat and fowl, vegetables and desserts. Unlike many Italian cookbook chefs, Ruggerio sincerely attempts to enlighten readers about the country’s regional differences. In short essays, he differentiates, for example, between the Neapolitan and Sicilian dialects and the “Fisherman in the Bay of Naples” and “La Tonnara,” the Sicilian tuna fishing tradition, often with tongue-in-cheek humor. The straightforward recipes aim for authentic, traditional preparations, such as Silken Scallion Soup with Squid, She-Crabs Marinara, Saut ed Sweet-and-Sour Tuna Steaks, Tripe Parmesan, Chicken Baked in Clay and Neapolitan Cauliflower Salad. Instructive sidebars introduce readers to Italian fundamentals, such as cooking pasta, filleting fish and roasting peppers. Alternating between entertainer and teacher, Ruggerio regales readers with countless amusing anecdotes, from yarns about his overprotective, meddling Sicilian aunt Josie (who insisted her daughter spend her honeymoon at home) to his hypochondriac friend Joey Baccala. Melding a bent for tall tales with alluring preparations, Ruggerio inspires readers to explore southern Italy with a smile and an adventurous palate.  Currently available on Barnes & Noble and Amazon.

Who doesn't love Linguini & Clams? My recipe in my

I join one of the best chef in America, Jasper Mir