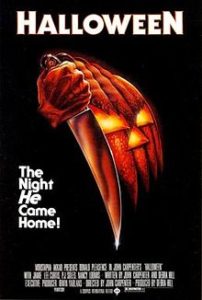 OK kiddies, this is the day before All Hallows Eve’, and today’s review is of the mother of all “slasher” films, Halloween. John Carpenter’s 1978 tour de force, perhaps the most widely imitated film of the 70s. Now, forty years later, it’s still creepy as hell.

The plot, as unpretentious as they come, melds every day with the unthinkably horrific. The tale of Halloween in Haddonfield, Illinois, has been told and retold: the night in 1963 that an angelic 6-year-old Michael Myers, dressed in a clown suit, brutally murdered his teenage sister, followed by the night 15 years later, again on Halloween, when he broke out of a mental institution in his famously mutilated William Shatner mask to terrorize the virginal babysitter Laurie Strode, a.k.a. Jamie Lee Curtis in the role that would make her the ultimate scream queen.

“Was that the Boogeyman?”

Carpenter’s film literally shares the same DNA as Alfred Hitchcock’s Psycho (Curtis is the daughter of that film’s star, Janet Leigh). The films deal with psychiatric horror, the killers in both could live in the real world – they are flesh and blood monsters-and that’s what makes them terrifying. Psycho and Halloween are also similar in that they imply their violence rather than show it.

Michael is a faceless and remorseless being who has a plan for his town, and he’s a vicious horrifying villain, who mends himself into the shadows of the night, and uses Haddonfield as a playground to torment Laurie Strode. The irony of the inevitable battle is that his motive is to murder the babysitters, while Laurie never quite listens to the children, the only people aware of Michael, and his menace, in the end. “Halloween” is a ticking time bomb of dread and suspense that explodes into a cat and mouse battle that still sets the standard for slasher films and horror in general, and it’s one of the many masterpieces from director John Carpenter that hasn’t aged a bit.

To call “Halloween” merely brilliant isn’t giving it enough credit. As a horror film and as a historical milestone that single-handedly shaped and altered the future of an entire genre, it’s downright transcendent. My rating, out of five fangs, this one gets 5 BIG bites!