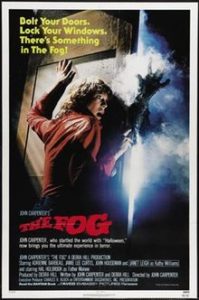 I have to preface this by saying this movie was a favorite of mine for years. At this time of the year, The Fog is always on my watch list. After Halloween, this is also my favorite John Carpenter movie. And who doesn’t love Carpenter’s wife at the time and Maude’s daughter; Adrienne Barbeau, she is terrific. Joining Barbeau is Jamie Lee Curtis, Tom Atkins, Janet Leigh, and Hal Holbrook. Taken into consideration that the films that Netflix is churning out without a single recognizable face, this is some cast!

Now for the film itself, how can you go wrong beginning the movie with none other than John Houseman. As the name of the movie scrolls down the screen, Houseman sits around a campfire telling children about the story of a ship that went down near their home Antonio Bay and how the drowned sailors will reappear 100 years to that very night in the fog. Does it get any better than that?

Barbeau in the lead as “Stevie Wayne,” a small- town disc-jockey whose studio is a lighthouse. “Wayne” has a sexy voice that complements the story and adds a nice touch to it. Then there’s the real-life mother-daughter duo of Janet Leigh and Jamie Lee Curtis. The “star” of this film, however, is the silvery, luminescent fog….a special-effect that was eerie 25 years ago and still has that effect.

The main gist of the story; one hundred years ago, on April 21st, the wealthy leper Blake bought the vessel Elizabeth Dane and moved with his friend from a leper colony to California to build a town for them to live with more comfort. However, while crossing a fog in Spivey Point, they were misguided by a campfire onshore, steering the course of the vessel toward the light and crashing her against the rocks. On the present days, on the celebration of the centenary of the fishing town Antonio Bay, a glowing fog appears, bringing the zombies of Blake and his crew to kill the residents. Father Robert Malone (Hal Holbrook) finds the hidden journal of his grandfather in the wall of his church and discloses that Antonio Bay was built with Blake’s gold. Further, a group of conspirators including his grandfather lighted the fire to sink Elizabeth Dane and robber Blake’s fortune and now the ghosts of Blake and his crew are seeking revenge on the locals.

“The Fog” is a dark ghost story of this master of horror John Carpenter, who deserves an Oscar his great filmography. The cinematography and special effects are great, giving a scary atmosphere without the need for gore. It is nice to see again a gorgeous twenty-three years old Jamie Lee Curtis acting with her mother Janet Leigh. The screenplay builds the horror at a low pace, but increasing the tension.

My rating, out of five fangs, this one gets 3 ½ bites, I really enjoy this flick!

Stay tuned when I next review a monster flick from the English horror makers of Hammer Studios!