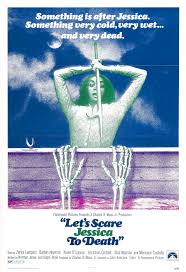 Since its premiere way back in 1971, this low budget psychological horror movie has drawn comparisons to Joseph Sheridan Le Fanu’s novel Carmilla (1871). I did enjoy the flick, though I think the film scholars who are now so generous with their raves might be partaking on a few of those psychedelic drugs of that hippie era.

Lambert’s character, Jessica, is a fragile young woman who has just been released from a mental institution to her husband and his hippy friend who take her to a rundown farmhouse on an island in Connecticut. The moment they enter the house they are startled by a young girl who is a squatter. Hey, it’s the age of free love, so they plead with her to stay, so much so it’s creepy.

Throughout the movie, the vision of a young girl appears and reappears to Jessica. It turns out that this is more than a mere vision, hell no…the young girl is a vampire. Now we’re talking!

Jessica finds herself swimming with the vampires, and when she tried to sink her fangs, Jessica runs to the comfort of her bathroom.

She ends up running through an apple orchard where she runs into her husband’s friend’s corpse. Holy smokes! She ends up escaping onto the ferry back to the mainland. As she sails off, (no this is no Titanic!) she says to herself, Jessica says to herself in voice-over, “and yet I have to believe it. Nightmares or dreams? Madness or sanity? I don’t know which is which.” Well lady if you don’t, how the hell do we?

Don’t watch this movie straight if you think you’re going to get through it. I had a sinking feeling like I wasted my time. Sorry gang.

My rating, out of five fangs, this one gets 1/2 bite (with three vodka’s it’ll garner 2 stars).

Stay tuned when I next review the original rendition of a classic starring Maude’s daughter, can you guess?